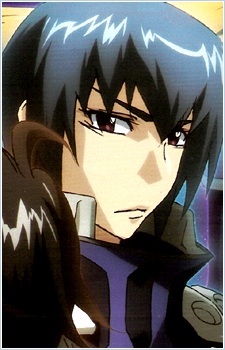 Asagi Toshikazu is a "Prince", one of the genetically engineered children raised to operate armed robots called "AHSMB" (Advanced High Standard Multipurpose Battle Device). He along with his teammates recently graduated from a school in an academic city called Grandzehle.

Asagi has a temper that is seemingly uncontrollable. When mocked or pestered, Asagi angrily responds either by a fist fight or yelling. He also seems cocky and sure of his skills as a fighter and a leader, but he can acknowledge the brave and kind actions of his friends, even though friends like Izuru and Suruga can annoy him at times.

Asagi went through rigorous training in his school to be a soldier and a pilot, and when he was given the Blue 1 to pilot, he shows great skill with his blade, easily cutting through enemy forces.

Not much is known of Asagi's past.

Simon is the commanding officer of the MJP, it was revealed that Simon is actually a donor of DNA for both Asagi and Izuru. This makes him somewhat Asagi's biological father.

Retrieved from "https://gingakikoutai.fandom.com/wiki/Toshikazu_Asagi?oldid=4426"
Community content is available under CC-BY-SA unless otherwise noted.