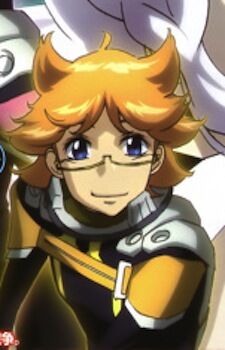 Suruga Ataru is a "Prince," one of the genetically engineered children raised to operate armed robots called "AHSMB" (Advanced High Standard Multipurpose Battle Device). He along with the rest of Team Rabbits recently graduated from a school in an academic city called Grandzehle.

Suruga's love for mechs and guns makes him an emotional basket-case of joy and eagerness. Suruga also tends to be a 'pretty boy' whenever around beautiful girls and tries relentlessly to make them notice him. The gun otaku's personality is also known to be in conflict with Asagi's furious personality when the two discuss controlling tempers and steady planning. 'Steadily' also complements Suruga's character well as he can remain calm even in the worst times. In a way, he is shown to be a focused and reliable comrade in arms.

Community content is available under CC-BY-SA unless otherwise noted.